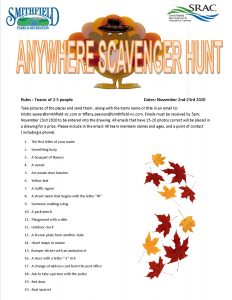 Rules: teams of 2-5 people
Take pictures of the places and send them, along with the items name or title in an email to: kristin.sasser@smithfield-nc.com or tiffany.pearson@smithfield-nc.com. Emails must be received by 5pm, November 23rd 2020 to be entered into the drawing. All emails that have 15-20 photos correct will be placed in a drawing for a prize. Please include in the email: all team members names and ages, and a point of contact (including a phone).

Our annual Turkey Dinner has been cancelled, but we are proceeding with the Country Store (inside) and Yard Sale (outside) on Fri 06Nov20 from 10-6pm and Sat 07Nov20 from 8-4pm. Following all Covid safety regulations: required masks inside and outside, <= 25 persons in bldg at any time, temp wil be taken before entering bldg, one-way in and one-way out. Thank you!

In honor of Veterans Day, The Clayton Center is proud to present a live video stream of “The Greatest Generation” as performed by The Jazz Ambassadors of The United States Army Field Band.

Please join us as we honor those who have served and defended our country.The Jazz Ambassadors is the official touring big band of the United States Army. Formed in 1969, this 19-member ensemble has received great acclaim at home and abroad performing America’s greatest original art form, jazz.

Concerts by the Jazz Ambassadors are programmed to entertain all types of audiences. The band’s diverse repertoire includes big band swing, bebop, Latin, contemporary jazz, standards, popular tunes, Dixieland, vocals, and patriotic selections, many of which are written or arranged by members of the Jazz Ambassadors.

The Jazz Ambassadors has appeared in all 50 states, Canada, Mexico, Japan, India, and throughout Europe. Recent notable performances include concerts at the Toronto Jazz Festival, the Richmond Jazz Festival at Maymont, the Kennedy Center Honors, the Jazz Education Network Conference, and an appearance on the Colbert Report.

Gordon Goodwin, Bobby Shew, Ernie Watts, and the Dave Brubeck All-Star Quintet are just a few of the outstanding jazz artists who have shared the stage with the Jazz Ambassadors. The band has been featured in joint concerts with Marvin Hamlisch and the Pittsburgh Symphony Orchestra, the San Diego Symphony Orchestra, the Seattle Symphony Pops, the Colorado Pops Orchestra, and the New York Pops at Carnegie Hall.

The Jazz Ambassadors’ rigorous touring schedule and reputation for excellence has earned it the title “America’s Big Band.” 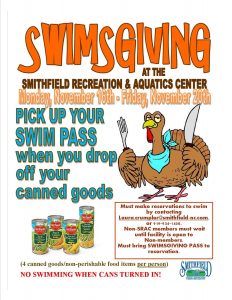 Pick up your Swim Pass when you drop off your canned goods. 4 canned goods/non-perishable food items per person. NO SWIMMING when you drop cans off you must make reservations. Non-SRAC members must wait until facility is open to Non-Members. Must bring your pass with you when you come to swim.

Onyx Club Boys is an acoustic string band (violin, guitar, upright bass and drums) rooted in Django Reinhardt’s Gypsy Jazz sounds of 1930’s Paris, and Stuff Smith’s New York City Swing. However, being from 21st Century North Carolina, their diverse influences take the music beyond borders. It’s a trip around the world, which will make you swoon, tap your feet and realize how universally similar music really is.

The band just released their newest album, Million Color Vision, in 2018. It features catchy originals along with a few classics, and was carefully crafted and recorded over the last few years.

Members have played in bands such as The Squirrel Nut Zippers, The Old Ceremony, Dialli Cissokho and Kaira Ba, and the Paperhand Puppet Intervention band.

Join us as we prepare for the holidays! The Giving Thanks Live Stream Compilation features highlights from some of our favorite pandemic live stream concerts. These North Carolina musicians sustained us through nearly a year of uncertainty.
The Clayton Center staff would like to thank everyone who has tuned in to our Wednesday night live stream concert series. We are continually grateful for the support we have received for these concert broadcasts. We still do not have an estimated date for reopening our venue, but we do hope to see you all in person soon.
In the meantime, enjoy the holiday and enjoy the show!
This show will be broadcast via YouTube at the following link: https://youtu.be/t7plwfcVBVo
Read more
Categories: Community Event
Nov
28
Sat
Shop Small Selma @ Uptown Selma
Tickets
Nov 28 all-day 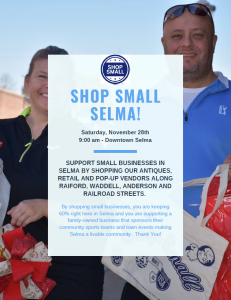 Shop Small Selma!
Support Small businesses in Selma by shopping our antiques, retail and pop-up vendors along Raiford, Waddell, Anderson and railroad streets.
The Max G. Creech Historic Museum and the Big Red Caboose at Union Depot will be open for tours and information as well.

By shopping small businesses, you are keeping 60% of every dollar spent right here in Selma and you are supporting a family-owned business that sponsors their community sports teams and town events making Selma a livable community.
Thank You!

ChamberSoul cellist/vocalist Shana Tucker, accompanied by Christian Tamburr on piano, share “songs for the season” — a thoughtfully curated evening of music and conversation, in classic cabaret style. This musical program will feature songs celebrating the upcoming holidays and also selections that reflect upon the “season” of 2020.

Local vendors will be on site to help you with all your Christmas gifts. Food truck will be there also
Just a safe day of shopping to help get you in the Christmas Spirit. 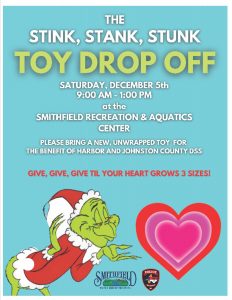 Please bring a new, unwrapped toy for the benefit of Harbor and Johnston County DSS